Come and see the comedian contestants battle their wits against tepid-fire question rounds, face off on the Wall of Ducks, and try and snatch victory from the terrifying Jaws of Defeat. All for the ultimate glory of winning one of the sensational prizes that Mick salvaged from hard-rubbish.

It’s been a while since anything canonically Grouse was done in the physical realm, but by god we’re back in a big way this year! We haven’t printed “Grouse Media presents …” on a poster since 2016, and we still haven’t this year because it didn’t fit the design aesthetic but it’s there in spirit and that’s what counts!

Yes, we have a real show that you can go and see in person as part of the 2021 Melbourne International Comedy Festival that’s slightly less international this year but is still full of comedy!

This show has a regular cast of amazingly funny people, plus we’ve got different guests invited over to play each night. It’s going to be amazing fun and we hope tons of people come to see it, because oh god we’ve worked so hard and it’s coming together so well.

Do not delay, go ahead and buy tickets to see this 6-night-only wonder of the modern comedy world, so in your twilight years when the grandchildren gather at your feet you can tell them you were there at Damo and Mick’s Backyard Quiz and they’ll look up for half a second from their Mind-Phone or Space-Tablet or iHat whatever the fuck kids in the future are obsessed with I don’t know I’m not a future predictor I’m a game show host. 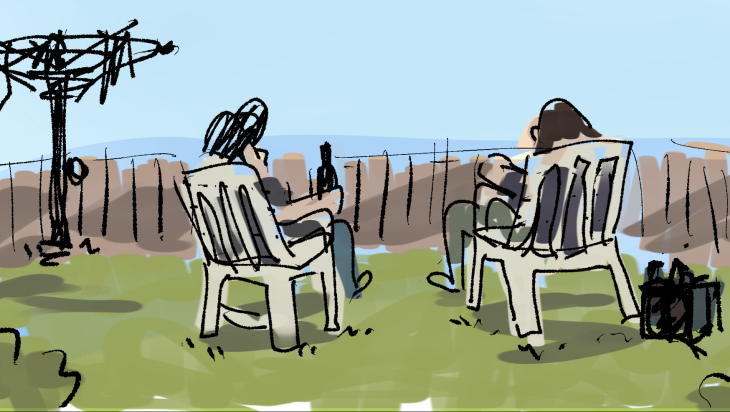